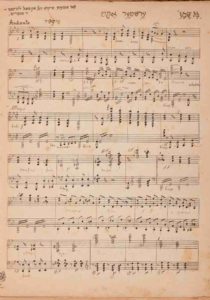 The first page of the piano score of the opera

Bas Sheve premiered on May 24,1924 at the Kaminsky Theatre in Warsaw. Composed by Henech Kon to a libretto by Moyshe Broderzon, the opera was an immediate success and produced a strong impact, of which the music critic and conductor Yisokher Fater later wrote: “The enormous project generated great enthusiasm amongst the Jews of Warsaw. Each performance became a celebration of Jewish musical art.” Kon’s contemporary, the poet and essayist Melech Ravitch, declared him “destined” to become the leading composer of secular Yiddish music.

Although rather modest by modern standards, the premiere production had an excellent cast, including the famed husband and wife duo, baritone Moshe Rudinow and mezzo-soprano Ruth Leviash, alto Shimen Orliuk and Henech Kon himself, who played the orchestral parts on the piano and sang the bass part – as no professional Yiddish bass singer was available. These fine voices were complemented by the celebrated Moshe Shneur Choir, ensuring the high quality of the performances.

Kon’s original piano score, a beautiful, clearly-written manuscript with transcribed Yiddish text, was miraculously preserved and provided the basis for the present orchestral version by Joshua Horowitz. Ninety-five years after its premiere, a Yiddish masterpiece returns to the stage in its originally intended form!